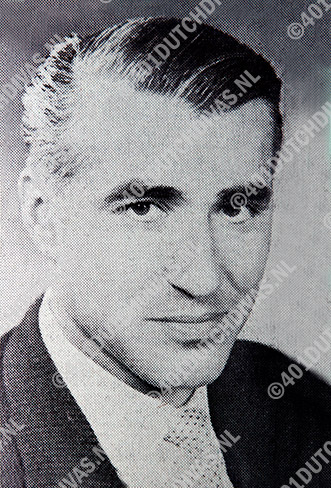 Flemish Baritone Frans Meulemans was born in Wilrijk (BE), on May 7, 1920. He studied with Willem Ravelli at the Antwerp Conservatory, where he was previously awarded the First Prize, graduating with honors.

Frans Meulemans' First Prize at the International Vocal Competition (IVC) 's Hertogenbosch 1954 has always remained a little in the shadows of the careers of Annette de la Bije and Hans Wilbrink, both Dutch singers with whose significant careers the IVC could then make huge promotion within The Netherlands. For the sheer lack of biographical and chronological details it is hard to judge the scope of Meulemans' career now, although the little that we know suggests that we should give him due credits in retrospect. His career culminated in a prestigious engagement with the Royal Flemish Opera Antwerp (KVO), where he sang during two seasons, from 1961 to 1963. The only other chronological detail that we currently know of Meulemans, is that he created the title role in Marinus de Jong's opera Esmoreit, at the KVO Antwerp, in September 1970. Other than that, nothing further is known about Meulemans, of which we do present the first ever online photograph here (and please, do not copy and reuse it without our permission).

From an exceedingly rare 1950's 10" recordings of songs for the familie, released at the instigation of 'The Flemish Union of Big Families & Special Actions for Young Families', we get a fair idea of Meulemans' voice. Meulemans sings 'Bruiloftslied (Wedding song), 'Moede' (Tired), 'Hij die geen liedje zingen kan' (He who cannot sing a song), and the evergreen 'Over 25 jaar' (In 25 years). From these four family-bonding light music songs, the most melodious ones in the classical music sense of the word are Preud'Hommes' 'Bruiloftslied,' and Renaat Veremans' 'Moede'. From the latter one especially, the image arises of an exceptionally warm, resonant and moving baritone voice. It is mellifluous, and Meulemans has a great sense of timing. While we cannot bring Frans Meulemans back to life, we are very proud to present a brief medley of these two intriguing little songs from 'De Familie in Feest,' which at least bring his voice back where it belongs: in the ears of those 21st Century audiences who appreciate the intimate artistry that Meulemans conveys through these songs. Admittedly, for some these songs may bring an edge of nostalgia for times long gone...

In addition, we have a brief, though unique medley of Meulemans in the mentioned world creation of Dutch composer Marinus de Jong's opera Esmoreit. This important creation suggest that Meulemans was at the peak of his fame in 1970 (apparently appearing here with the Royal Flemish Opera Antwerp as a guest performer). Even though Marinus de Jong may be forgotten today, I would say that, having heard this lovely, melodious opera, with numerous enchanting interludes and magical moments, it would rank highly among works I would perform if I were to run an opera house in Flanders today.

Regrettably, we have no other excerpts of Meulemans' voice, and this is also the only photo currently in our archives of him. Should you have further info on, photographs of, or recordings by Frans Meulemans, you are most welcome to contact us at This e-mail address is being protected from spambots. You need JavaScript enabled to view it