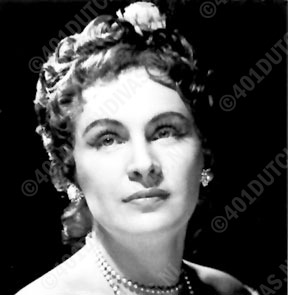 Erna Spoorenberg, born on the isle of Java (Indonesia). She made her debut at the Dutch radio in 1947 and at the 'Vienna State-Opera' in 1949. From 1955 at the 'Nederlandse Opera' in Mozart-roles and a.o. as as Violette (La Traviata), Norina (Don Pasquale). A soprano, of whom the Dutch writer Godfried Bomans said: "Two little braids with between them a mouth". Her career was between the fifties and seventies.

Erna Spoorenberg died on Thursday 18th March 2004 in her hometown Vught at an age of 78-year.