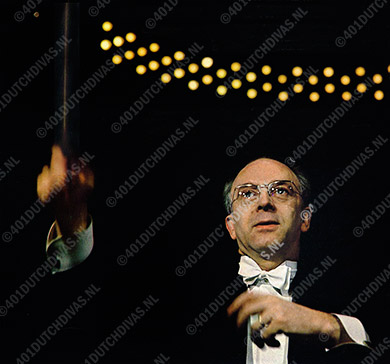 Surprisingly little is known about so prolific a conductor as André Rieu senior. He was born in Haarlem, on May 12, 1917. He is indeed the father of the world famous violinist/conductor/entertainer André Rieu junior.

André Rieu senior studied music at the Conservatories of Utrecht and Amsterdam. Between 1946 and 1949 he was one of the conductors of the Netherlands Radio Union, where he frequently appeared as guest conductor. Under his direction many important new works have been performed for the first time. In 1949, Rieu senior accepted the post of principal conductor of the Maastricht City Orchestra, the oldest symphony orchestra of The Netherlands. Rieu then transformed this orchestra into the provincial Limburg Symphony Orchestra (LSO), where he remained principal conductor until 1980. In addition to his many appearances as guest conductor in Holland, Belgium, Germany, Poland, Vienna, London, and Athens, he also regularly conducted his own LSO in The Netherlands, Belgium and Germany.

Rieu senior features in our International Vocal Competition Den Bosch pages, because he stood in for Hein Jordans at the 1957 IVC Gala Concert with the winners of that year’s awards, in September. He died in 1992.