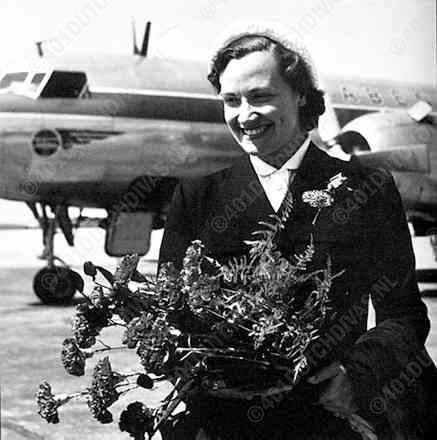 Arrival at the airport Schiphol, January 1951

Kathleen Ferrier was born in Higher Walton (Lancashire) on April 22, 1912 into a family of modest means. Here parents were music-lovers, and at the age of three Kathleen began to play the piano. She passed her youth in Blackburn and her original intention was to become a pianist. Financial circumstances at home prevented this and she became a telephone operator at the age of fourteen. She did not abandon the piano altogether and started to sing occasionally for her own amusement. She married in 1935 and took part in the Carlisle Festival Contest in 1937 not only as a pianist but also as a singer in response to her husband's challenge. She won the first prize in both categories and this was all the encouragement she needed to continue her musical studies. In 1939 she started studying singing, first with Dr. Hutchinson in Blackburn. He worked with her over a period of over three years, until Christmas 1942. After a period during the war of travelling England to appear in the most isolated of places, often under very difficult conditions she settled in London, 1942. There she continued her vocal training with Roy Henderson, or 'Prof' as she used to call him affectionately. Around 1944 she had established herself as an oratorio singer and was heard by Benjamin Britten when she sang in Messiah in Westminster Abbey. At that time Britten was working on a new opera for Glyndebourne after having gained international successes with his Peter Grimes in 1945 and it was in fact Peter Pears who proposed Kathleen Ferrier for the title part in The Rape of Lucretia (alternating with Nancy Evans), 1946. This became the start of her international career; due to the tour on the continent Holland was the first country where Kathleen Ferrier was heard outside England. She immediately became a great favourite with the Dutch public and returned to Holland very soon for recitals. 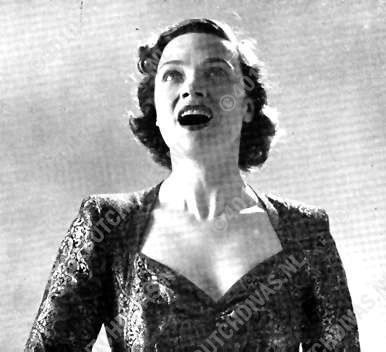 In 1947 Glyndebourne heard her for the first time as Orfeo in Clucks Orfeo ed Euridice and again Holland should still be grateful to Peter Diamand for he organised a series of performances of this opera during the 1949 Holland Festival with Kathleen Ferrier and conducted by Pierre Monteux. Thus Holland became the only country outside England where Kathleen Ferrier has been heard and admired in both her operatic creations.

Of all the composers with whom Kathleen Ferrier was associated, one stands out: Gustav Mahler. Despite her illuminating performances of 'Das Lied von der Erde', and the three 'Rückert Lieder', it was with the 'Kindertotenlieder' that she felt an especial affinity. Performances with widely differing conductors punctuated her career: Fritz Reiner, Erich Kleiber, Jonn Barbirolli, Clemens Kraus, and the two great disciples of Mahler, Bruno Walter and Otto Klemperer. At the piano she was accompanied by a.o. Phyllis Spurr, John Newmark and Gerald Moore. Especially Barbirolli and his wife became close friends just as John Newmark and Gerald Moore.

....... Since Ferrier's untimely death, it is peculiarly moving to hear Ferrier sing 'Ich bin der Welt abhanden gekommen', although she is lost to the world, she is still part of it. As long as this performance remains available, that will be so.

In 1951 the first symptoms manifested themselves of the illness that in the end would be fatal for her, but at first it seemed that an operation had put a stop to this. New symptoms occurred in 1952 but they did not prevent her from accepting an invitation by Sir John Barbirolli to sing Orfeo in Covent Garden. She sang a beautiful first night on February 3, 1953, but during the second performance on February 6 she was in terrible pains and only her enormous will-power enabled her to finish the performance in such a way that nobody in the audience had any notion of this. She was taken straight into hospital from the theatre where two operations in succession seemed to improve her condition. But on the morning of October 8, 1953 she passed away calmly and peacefully; thus came an end to the life of one of the greatest and most endearing singers of the century. A singer who, after an international career that lasted in fact no more than six years altogether, has obtained an everlasting place in the hearts of those who heard her in the flesh or came to know her through her records.