‘Derek Hammond-Stroud was a highly regarded baritone who enlivened the British lyric stage for several decades in a variety of roles. His remarkable diction enabled him to shine in patter roles of Gilbert and Sullivan operettas and he featured prominently in that repertoire throughout his career. But he also brought that asset to the landmark Sadler's Wells productions of Wagner under Reginald Goodall, delivering colourful, accomplished performances of the roles of the querulous town clerk Beckmesser in The Mastersingers of Nuremberg and of the scheming dwarf, Alberich, in The Ring of the Nibelung.’ (The Guardian, 2012 Obituary)

‘Derek Hammond-Stroud, who has died aged 86, was a versatile baritone who could turn his impeccable diction to German lieder, Wagner’s Ring Cycle, contemporary opera and Gilbert and Sullivan.’ (The Telegraph, 2012 Obituary)

The voice of Derek Hammond Stroud (London, January 10, 1926 – May 14, 2012) was recognized as early as age 10, when he received his first stipendium. He attended Salvatorian College, Harrow, and went on to study at the Trinity College of Music. Subsequently, he completed his studies with Elena Gerhardt in Vienna and with Prof. Gerhard Hüsch. In 1954 he won first prize in the London Music Festival. Subsequently, he made his debut in 1955 in Haydn's Orfeo ed Euridice, a concert performance at the St Pancras Festival that marked the British premiere of the work. There were early appearances with the Chelsea Opera Group, the New Opera Company and continued performances at the St Pancras Festival, where, in 1957, he was Publius in Mozart's La Clemenza di Tito. Following, Stroud participated in the International Vocal Competition Den Bosch in September 1957, where he obtained the Second Prize in the ‘Jos Orelio’ category of basses and baritones. Onwards, he continued to appear at the St Pancras Festival for several years, which brought about his appearance in the first British performance of Rossini's La Pietra del Paragone in 1963. 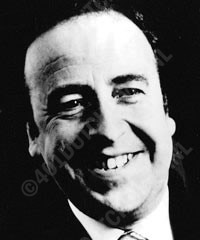 Stroud appeared at Glyndebourne from 1959 onwards, and he joined the ranks of the Sadler's Wells company (subsequently English National Opera) in 1961, distinguishing himself in such roles as Dr Bartolo in Rossini's Il Barbiere di Siviglia, Melitone in Verdi's La Forza del Destino, Rigoletto, Papageno in The Magic Flute, Sagrestano in Tosca and a succession of character parts in Offenbach and Gilbert and Sullivan operettas. From 1971 onwards he also appeared at Covent Garden (a.o. in Strauss’s Der Rosenkavalier), and Glyndebourne in 1973 ( The Visit of the Old Lady by Gottfried von Einem). To all these roles he brought an animated delineation enhanced by his trademark diction. 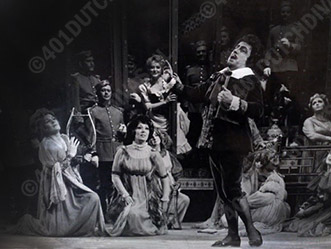 Gilbert and Sullivan roles formed the backbone of his frequent appearances at the BBC Proms. Between 1968 and 1988 he featured in 31 performances of Gilbert and Sullivan operettas there, with appearances also in Berlioz's Béatrice et Bénédict, Britten's Gloriana, Walton's Façade, Stravinsky's Renard, Verdi's Macbeth and La Forza del Destino, and Johann Strauss's Der Zigeunerbaron. According to Barry Millington for The Guardian, ‘his acting skills were also brought into play here: the hangdog expression and furrowed brow of his Ko-Ko, the Lord High Executioner in The Mikado – to take just one example – contributed to an amusing portrayal.’ He also filmed a number of Gilbert and Sullivan roles, notably Bunthorne in Patience. Stroud to The New York Times: ‘One misses the audience reaction, but you can point lines, twist words in much subtler ways, speak quietly and still make a tremendous impact.’

Stuff of legend – The Goodall Ring

Stroud’s exemplary diction was a distinguishing feature too of his Beckmesser and Alberich for Sadler's Wells. In 1968, when Reginald Goodall bravely (recklessly, some thought) brought an English version of Wagner’s The Mastersingers of Nuremberg to Sadler’s Wells, Hammond-Stroud was Sixtus Beckmesser, the pedantic musical philistine, with Alberto Remedios as Walther. The coaching sessions took place in Goodall’s room, dubbed ‘Valhalla’ by the singers, and Hammond-Stroud sang the part ‘with a strong, agreeable tone’, noted one critic. Goodall's biographer John Lucas records that Hammond-Stroud ‘became aware that Goodall identified himself closely with the frustration and anguish of the Nuremberg town clerk who is treated with ridicule by his fellow citizens. For Goodall, Beckmesser was a tragic, rather than a comic character" and this was reflected in Hammond-Stroud's approach, which became "an impersonation of remarkable subtlety and virtuosity’. 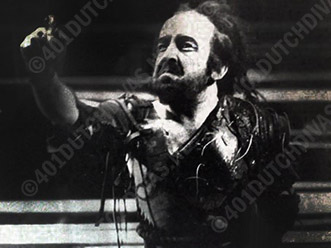 He also sang Alberich in Götterdämmerung, another role in which he brought the words vividly to life. Barry Millington for The Guardian:

‘His Alberich was richly drawn, deploying incisive enunciation that could nevertheless be varied to dramatic effect. When Alberich cursed the gods for robbing him of the ring, for example, Hammond-Stroud was able to combine vocal colour and verbal distortion to convey the scorn and twisted hatred of the character.’ 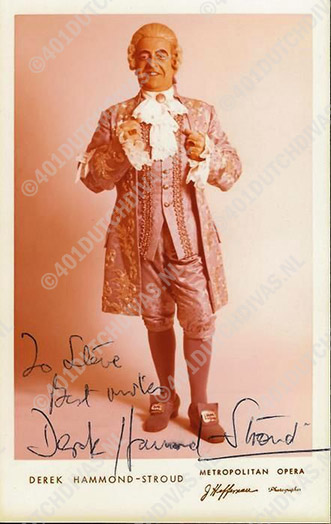 After making his Covent Garden debut in 1971 as Faninal in Der Rosenkavalier – a role in which he succeeded in combining oleaginous deference and self-satisfaction to devastating effect – he sang frequently with the company throughout the following two decades. Glyndebourne audiences enjoyed his appearances in this period and his debut at the Metropolitan, New York, once again as Faninal, launched a career in the US too, leading to appearances in San Diego and Houston, as well as such prominent houses as the Teatro Colón, Buenos Aires, and the National Theatre, Munich. The classic Met production of Der Rosenkavalier, in which he starred alongside Tatiana Troyanos, Kiri te Kanawa, Kurt Moll and Luciano Pavarotti as the Italian Singer, was filmed for American television in 1982.

Apart from singing Bach and Handel, including Christus in the St John Passion,

Hammond-Stroud was also an accomplished lieder singer. He appeared regularly on the concert platforms of London, Vienna and Amsterdam. He was often heard at the Wigmore Hall, making his debut in 1956 with Gerald Moore, and returning on several occasions, including in 1980 ‘in full-bloodied voice’ to perform Brahms’s ‘Die Schöne Magelone’ with Geoffrey Parsons. Significant performances followed with Fauré's ‘La bonne chanson’, Britten's ‘William Blake songs,’ and Pfitzner's ‘Eichendorff settings’. A performance of ‘Die Winterreise’ at the Wigmore Hall in 1979, with Geoffrey Parsons on the piano, is still remembered by many who were there. The recording ultimately landed on a belated Exegete CD in 2002, which was enthusiastically reviewed by Denby Richards. 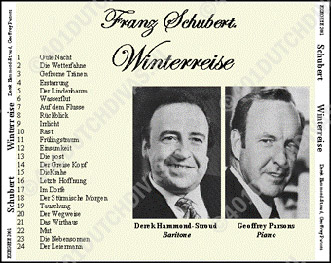 ‘There are a small handful of recordings of Winterreise which hold me in thrall form the opening bar to the final note of Der Leiermann and now I have another. This is a recording made in The Wigmore Hall on 24th January 1979 by the uniquely versatile Derek Hammond-Stroud partnered by Geoffrey Parsons, surely one of the greatest piano accompanists of the last century. The concert had been arranged by the Schubert Society of Great Britain who undoubtedly appreciated Derek Hammond-Stroud’s genius in the world of Lieder. That he was one of the finest international opera singers of his time, equally effective in Gilbert and Sullivan, Mozart, Richard Strauss and Wagner, to all of which he bought a vivid sense of theatre and characterisation, may well have persuaded the public that he might be over the top in Schubert. In fact, he projects Müller’s unhappy poet with the minimum of display and the maximum communicative musicianship. His love for the text and innate understanding of Schubert’s deceptively straight forward settings is gripping while Geoffrey Parsons is the ideal musical partner in what is a wonderfully involving experience. While each song is an intrinsic part of the whole it is Hammond-Stroud’s bright sense of urgency in Die post which miraculously becomes the turning point between hopeful expectation and final degeneration. That this remarkably well recorded live performance, which is still talked about with affection by those who were in the Wigmore Hall that evening, has sat on the shelf for nearly a quarter of a century is extraordinary.’ (Denby Richards)

In 1986 Stroud inaugurated the Malta Festival of Music with ‘Winterreise’. Of his recording of Elgar's The Starlight Express, BST wrote in The Telegraph:

‘Stroud was a warmly avuncular and often magical soloist in Vernon Handley's 1976 recording of Elgar's The Starlight Express and served as an adjudicator for the Kathleen Ferrier Awards in 1974.’ (The Telegraph of May 31, 2012)

Stroud has sung under the personal direction of Sir William Walton on several occasions, notably in the BBC television premiers of his operas’ The Bear’ and ‘Facade’ at the Royal Albert Hall, the Aeolian Hall and at the Edinburgh Festival. He starred as Vicar in the landmark dvd production of Britten’ Albert Herring In 1976 he was made an Honorary Member of the Royal Academy of Music and in 1982 an Honorary Fellow of Trinity College of Music. He is the recipient of the Sir Charles Santley Memorial Gift and in 1987 was awarded the O.B.E. Stroud died on May 14, 2012.