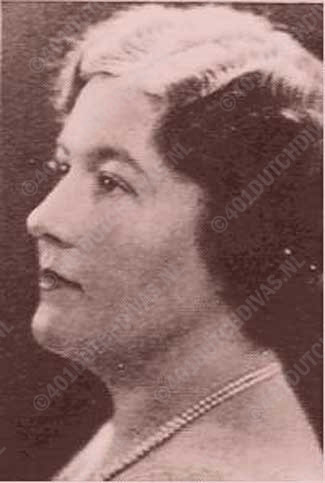 Annie Woud had her singing-training in the Netherlands (Amsterdam) with the singing-teacher Amalia Schuil-Hol and in Vienna, where she later was singing regular for the 'Gesellschaft der Musikfreunde'. She made her debut in 1930 at Vienna in the 'Eight's Symphony' of Gustav Mahler. She made lots of concert tours a.o in 1946 to South-Africa, appeared at the Edinburgh Festival in the 'Stabat Mater' of the Dutch composer Rudolf Mengelberg (nephew of conductor Willem Mengelberg), together with Louis van Tulder, but at all she was mainly to hear in the Netherlands in oratorio- and concert performances as the yearly 'Matthews Passion' together with Jo Vincent in the 'Groote Kerk' at Naarden under Anthon van der Horst. Her farewell came in 1954.