The first black American, who made name in the world of classical music, was the tenor Roland Hayes. His first appearance was in New York, in 1917, at an age of 30-year. His first appearance in Europa was in 1920, in London. Just about 1930 came Marian Anderson as the first prominent female black-singer. Other "Black Divas" have come before Anderson: Elizabeth Taylor-Greenfield (known as 'The Black Swan'), Mrs. Sampson Williams ('Marie Selika'), and Sissieretta Jones ('Black Patti'); none, however, was able to break through the glass ceiling of race and obtain more than modest notoriety. Marian Anderson, a woman with a pleasing plainness and dignity, with an extreme remarkable voice, which actual consists of two separate voices - an abyss low contralto, and a dramatic soprano - and with a serious and a profound musicality. 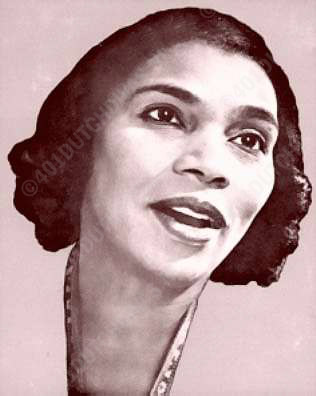 "In 1935, at Ostend ... a black woman ... sang her 'spirituals' before a civilised audience (and) at the first sound of that biblical voice - an unimaginable, unexpected fusion of contralto, mezzo and soprano - those indifferent spectators were moved by an incomparable stream of resonance ... Now, whenever I prepare to sing, I think back to that gushing vocal stream and to that Ostend concert which revealed to an astonished world: the harmonious and glorious voice of Marian Anderson ..."
Giacomo Lauri Volpi (Voici parallele; trans.P.D.)

Contralto Marian Anderson was born in Philadelphia, Pennsylvania. A variety of sources (Marian herself ?) suggested February 17, 1902, as her birth date; however, Anderson's birth certificate, released after her death, listed the date as February 27, 1897. Her father was an ice and coal salesman, and her mother was a former teacher.

Although Anderson had early showed an interest in the violin, she eventually focused on singing. The Black community, recognising her talent, gave her financial and moral support. She also gained the notice of tenor Roland Hayes, who provided guidance in her developing career. She first began to sing in the choir of the Union Baptist Church in Philadelphia, learning all the parts from soprano to bass, a factor that helped inadvertently to develop her extraordinary range. Not until she was 15 did she have her first formal lesson. Then the congregation of her church established a Marian Anderson fund to enable her to have regular and thorough training. In 1925 she won a contest in New York, and her prize was an appearance at Lewisohn Stadium with the New York Philharmonic. She was put under contract by a concert manager, but over the next few years her career came almost to a standstill, and she decided that in spite of the financial problems involved she must go to Europe to perfect her Lieder style. 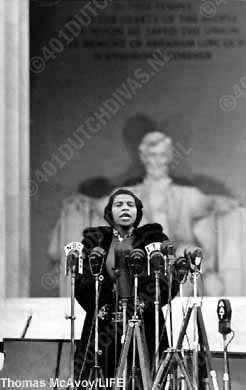 She sang her first European concert in Berlin in 1930 and followed that with an enormously successful Scandinavian tour, in the course of which she sang for Jean Sibelius, who humbly declared, "My roof is too low for you". In August 1935 she capped a sensational two-year circuit of Europe with a recital in Salzburg. "A voice like yours is heard once in a hundred years!" said Arturo Toscanini when he was introduced to her. Miss Anderson's Town Hall recital on December 30, 1935 - presented by Hurok, who had heard her in Paris - was a triumph. "Marian Anderson has returned to her native land, one of the great singers of our time" wrote Howard Taubman in The New York Times. She was then in demand from coast to coast as well as abroad. In 1938 she gave 70 recitals in the United States alone - then the longest, most intense tour in concert history for any singer. The following year she became an international symbol of the Negro's struggle for equality when, denied the use of Constitution Hall in Washington, D.C., by its owner, the Daughters of the American Revolution, she sang from the steps of the Lincoln Memorial on Easter Sunday for an incredible audience of 75,000.

In 1949 the contralto resumed concertising in Europe and in the 50th added South America, Japan and Israel to her itineraries. On January 7, 1955, Marian Anderson made her Metropolitan Opera debut as Ulrica in Un Ballo in Maschera - the first of her race to sing a leading role at the Met. The fall of 1957 found her on a 10-week tour of India and the Far East under the auspices of the U.S. State Department. Received as an ambassadress by heads of state and by the ordinary people as a great artist and human being, Miss Anderson travelled 39.000 miles, giving 24 concerts in 14 countries. She was accompanied by an audio-video team whose pictorial record was turned into a television program by Edward R. Murrow and Fred W. Friendly called "The Lady from Philadelphia:' "We made that documentary in the 'See It Now' Series:' wrote Murrow, "because we wanted the American people to know what one woman had accomplished in the field of human communications." The following year President Eisenhower appointed Miss Anderson U.S. delegate on the Human Rights Committee of the United Nations. She sang at President John F. Kennedy's Inauguration in January 1961, and at Christmas made a special flight to Berlin to sing for the American Armed Forces. In May 1962 she concertised in Australia for the first time. Her farewell tour began in Constitution Hall in October 1964, included the major cities of four continents and ended on April 18,1965, Easter Sunday, in Carnegie Hall. "There have been a considerable number of times when my mind has been forced to consider Marian Anderson not only as a contralto and musician, not only as an artist and patriot, not only as a supreme example of what we are on earth to prove (the American dream), but also as something which has nothing to do with the United States or the American dream," wrote Vincent Sheean. "It is the reality and the imperious exigence of the soul. Marian is a sort of proof of the immortality of the soul, or, if that is too extreme, of the existence of the soul to which an immortality may be postulated."

"There have been a considerable number of times when my mind has been forced to consider Marian Anderson not only as a contralto and musician, not only as an artist and patriot, not only as a supreme example of what we are on earth to prove (the American dream), but also as something which has nothing to do with the United States or the American dream," schreef Vincent Sheean. "It is the reality and the imperious exigence of the soul. Marian is a sort of proof of the immortality of the soul, or, if that is too extreme, of the existence of the soul to which an immortality may be postulated."
Marian Anderson died in Portland, Oregon, on 8th April, 1993.

Marian Anderson " He's Got the Whole World in His Hands", with Franz Rupp at the piano