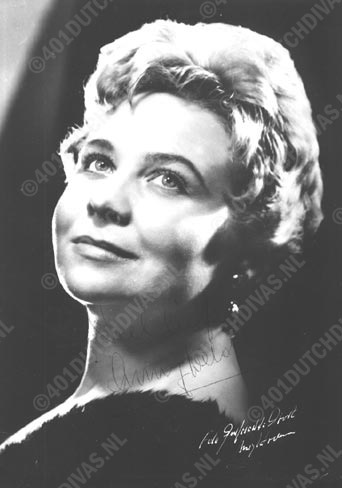 Anny (Annie) Delorie, born January 17th at Amsterdam, was specially successfully in opera. Her debut at the 'Nederlandse Opera' she made in the season 1950/51 in Manon (Jules Massenet). She sang the role of Rosette. Other singers in this performance, a.o. Frans Vroons, Chris Taverne, Jos Burcksen , Nel Duval and Louise de Vries. Her last appearance was in the season 1969/70 in Verdi's 'Un Ballo in maschera' with the role of - of course - Ulrica. She has sung at stage in more as hundred performances.

Anny Delorie died, rather unexpected, in her hometown Bovenkarspel on Thursday 19 November 2009.