American tenor Michele Molese (1936 – July 5, 1989) sang leading roles for nearly two decades with the New York City Opera. He was born in New York to Italian-American parents as... Kenneth Michael Pratt. He pursued his studies and early career in Italy, making his debut at the Teatro Nuovo in Milan in 1957. Usually, short biographies continue with saying that he toured the Italian provinces until his career took off, in 1958. Hitherto, however, it had not been known that he travelled to Amsterdam, The Netherlands at one point, where he must have settled for a while, given that he enlisted himself at the International Vocal Competition Den Bosch as 'a Dutch tenor from Amsterdam.'

401DutchDivas would like to know what exactly Michele Molese was doing in Amsterdam at the time; should you be able to shed light on this you can email us This e-mail address is being protected from spambots. You need JavaScript enabled to view it

That his listing wasn't a simple mistake is clear from Leo Riemens reviews of the competition, where he mentioned Molese's living in Amsterdam at the time, along with judging his voice one of the worst in all:

'He proved to possess a tremulous voice with a cheap timbre, and it was impossible to understand how he even made it to the finals' [Riemens mixes up the semi-finals and the finals, Molese stranded in the semi-finals – RS'

Admittedly, it is a bit gratuitous to put this stunning rendition of 'Mal regendo' immediately after Leo Riemen's surprisingly negative opinion on the young tenor. However, when written down in such harsh words, a critic should also be able to look in the mirror; the opinions of the press, including those of myself, in retrospect can sometimes be bewildering and/or amusing. Molese and his soprano colleague Evelyn Lear, likewise eliminated before the finals, secured the only two international careers of all participants bar Dutch baritone Bernard Kruysen (2nd prize). This is not to say that Riemens and the jury were wrong. Any given prize at vocal competitions is very much a matter of the form of the day, of nerves, or having a cold or not. Sometimes a singer also simply isn't ready for the challenge, but takes note of the criticisms and reworks his voice to the point where all initial limitations disappear. Such seems to have been the case with Molese, whose career took off after his IVC participation, even though the result had been negative. 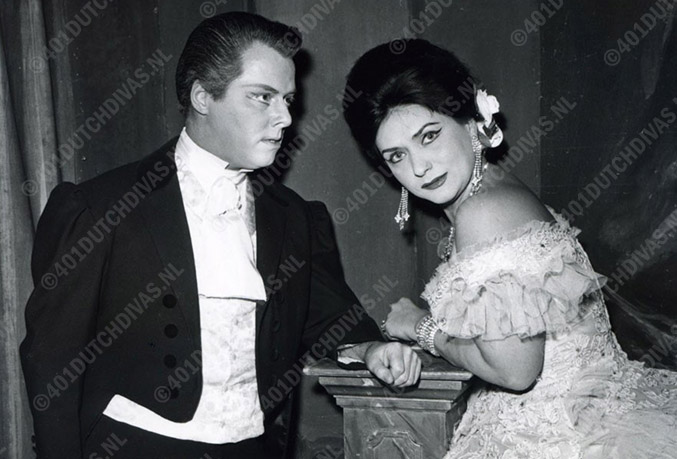 Onwards, Molese sang in other Italian cities and spent six seasons as a leading tenor of the Belgrade Opera in Yugoslavia before joining the City Opera in 1964 as Pinkerton in Madama Butterfly. He was praised by The New York Times at his debut for an 'unusually complete' acting portrayal that 'seemed to blend a little Stanislavsky with his Puccini,' and for a strong voice that was 'pleasant and fluent.' In the 1960's he became a household star tenor at the new York City operas where he sang across the tenor repertoire. In later years critics sometimes complained about his vocalism, but Mr. Molese continued to be indispensable to the company, appearing in almost every tenor role in the standard repertory. He was often Beverly Sills's

leading man, and appeared with her in new productions of Manon, Faust and Lucia di Lammermoor, among others. Molese's best remembered accomplishment is perhaps his recording of Don José in a Carmen highlights recording on Decca with Marilyn Horne. An exceedingly rare two CD album of his live recordings was released on Plant Tecval SA: 'Michele Molese... una voce dal vivo...'

Although Molese was a household tenor at the New York City opera for decades, his career and his temper would suffer from one single line written by the New York Times critic Harold C. Schonberg, who once accused him of 'squeezing some high notes'. After a particularly successful High C at the end of the duet 'O qual soave brivido' in Un ballo in Maschera, 1974, he stepped to the limelight of the New York City Opera, and said, 'That pinched high C is for Mr. Schonberg.' He was fired but later rehired by Julius Rudel, the company's general manager, and gave his last performance there in 1980.

Rudel had him fired for unprofessional conduct and told the press that he did not anticipate Mr. Molese's being rehired, but soon enough Molese returned there. In hindsight, the 'scandal' probably had enhanced his popularity, since he only did what hundreds of singers must have wanted to do. Molese gave his last City Opera performances six years later as Cavaradossi in Tosca.

Michele Molese died on July 5, 1989, in Broni, Italy, after suffering a heart attack. He was 60 years old and had lived in Broni since his – then recent – retirement from singing. Molese was married to Zoe Papadaki, a former mezzo-soprano who appeared in Carmen at the New York City Opera with him in 1967.