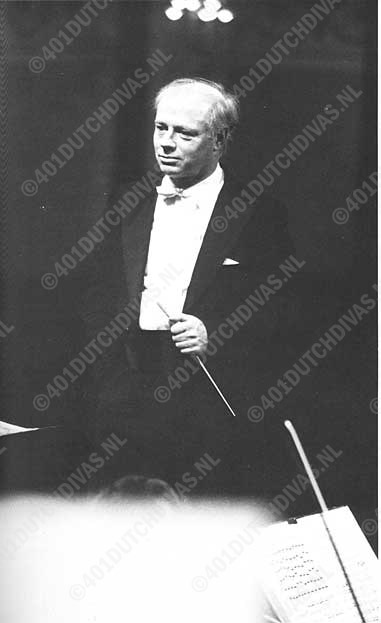 Bernard Haitink was born on March 4, 1929 at Amsterdam. The Dutch conductor is best known for his interpretations of Gustav Mahler, Anton Bruckner, Ludwig van Beethoven, and Franz Liszt. His conducting, which continued the tradition of Willem Mengelberg, was noted for its careful attention to detail combined with an uncommon strength of character and conviction.
He studied violin at the Amsterdam Conservatory, and orchestral conducting under Felix Hupka. As a violinist, he became a member of the Netherlands Radio Symphony Orchestra, and at the same time he took further lessons in conducting from Ferdinand Leitner, who in 1955 gave him a post as second conductor with the orchestra of the Netherlands Radio Union.
In 1956 Bernard Haitink married on the age of 27 with Marjolein Snijder, whom he learned to know at the conservatory, where she studied piano. In that period they had little attention to each other, but later, after a sudden meeting in Amsterdam, they became close friends. In October 1957 their first child was born, a daughter Marianne. In the coming five years the family enlarged to a number of five children.
In 1961 he succeeded Eduard van Beinum as the musical director of the Concertgebouw Orchestra in Amsterdam, a post which he retained for 27 years. He received invitations from the leading orchestras in the world. In 1967 he became the principal conductor and musical advisor to the London Philharmonic Orchestra. In 1972 Haitink turned his attention to opera, which led to his appointment in 1978 as music director of the Glyndebourne Festival in East Sussex, Eng. In 1977 he left the London Philharmonic and succeeded Sir John Michael Pritchard as the director of Glyndebourne Festival (until 1988).
Haitinks raising fame and the demands that the work makes on him, puts a rising pressure on his personal live and his marriage. He has always tried to separate his work and his personal live, but in the seventies it became clearly that the professional site get the mastery and, however he was a father of a family with five children, he hardly could be seen as a common Dutch family man. His wife and he departed at last as good friends and they stayed that for ever.

He devoted himself intensively to the works of Gustav Mahler, Anton Bruckner and Ludwig van Beethoven. His many recordings include a.o. cycles of the symphonies of Mahler, Bruckner, and Beethoven and the tone poems of Liszt. In 1988 he left the Concertgebouw in Amsterdam and the Glyndebourne Festival to concentrate entirely on Covent Garden in London, for which he was the musical director from 1987. In 1990 he was appointed as the president of the London Philharmonic Orchestra. In 1993 he conducted the European concert of the Berlin Philharmonic Orchestra, which was broadcast to over 30 countries. In 1994 he conducted the concert at the reopening of the Glyndebourne Opera. There, Haitink advocated contemporary English composers and gave first performances of works by Nicholas Maw, Colin Matthews and others. In 1995 he presented a cycle of Mahler symphonies in the Amsterdam Concertgebouw Hall in which he conducted the Royal Concertgebouw Orchestra, the Berlin Philharmonic Orchestra, the Vienna Philharmonic Orchestra and the Gustav Mahler Youth Orchestra. Since 1994, Haitink has been the musical director of the European Union Youth Orchestra, and since 1995 he has been the principal guest conductor of the Boston Symphony Orchestra with which he is giving performances in Tanglewood from the middle of 1996 to April 1997. During the same period he is conducting the Rotterdam Philharmonic Orchestra in Rotterdam, Antwerp and Amsterdam and the London and Berlin Philharmonic Orchestras. He is also undertaking a tour with the Chamber Orchestra of Europe which will take him to London, Frankfurt, Basle, Paris and Amsterdam.
Bernard Haitink is currently Music Director at the Royal Opera House, Covent Garden, where he regularly conducts opera and ballet, in addition to concert performances with the orchestra. His performances with the Royal Opera in recent seasons have included Peter Grimes, Arabella, Jenufa, Der Rosenkavalier, The Cunning Little Vixen and Don Giovanni. He has recently conducted new productions there of Le nozze di Figaro, Parsifal, Prince Igor, Die Meistersinger and Tippett's The Midsummer Marriage. He has also recently completed a highly acclaimed complete Ring cycle. His guest appearances in opera houses worldwide include regular appearances at the Metropolitan Opera, New York, and he is a welcome visitor at the Salzburg Festival.
Bernard Haitink was created Honorary KBE in 1977, and in 1988 was awarded an honorary doctorate in music by the University of Oxford. He was awarded the Erasmus prize in Holland in 1991, and he and the Orchestra of the Royal Opera House were awarded the 1996 Laurence Olivier Award for Outstanding Achievement in Opera for their consistently excellent performances throughout the year.