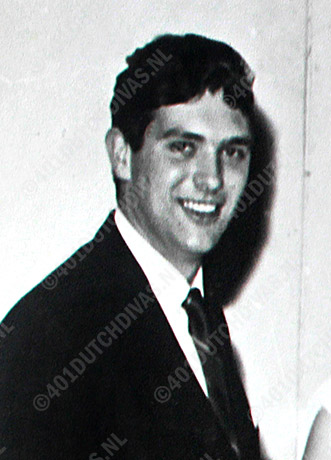 ‘…Beyond any doubt, a star. Here is a genuine lyric tenor, great, radiant, strong, excellently trained, showing a remarkable diction, and musicality. He is the favorite.’ (Leo Hanekroot in De Tijd, with respect to Wakefield’s appearance at the IVC 1960 semi finals)

English tenor John Wakefield was born as John Darling, on June 21, 1936, Yorkshire, UK. He later called himself Wakefield after his birthplace. He first became a pharmacist, before turning to singing professionally. John was honored to receive the Kathleen Ferrier Scholarship in 1958. He studied at the Royal Academy of Music, London, with IVC Jury members Roy Henderson (IVC Jury 1954 onwards), and Ettore Campogalliani (IVC Jury 1962) in Mantua. In September 1960, Wakefield participated in the IVC Den Bosch, where more than one critic had wished for him a First Prize, rather than the Second Prize. In the words of Johan van Dongen:

‘A First Prize for tenors seems difficult to hand out for the Jury, since I was sure that John Wakefield was headed straight for the great Jacques Urlus Prize. In Verdi’s ‘Ingemisco’, a song by John Williams, and ‘Cielo e mar’ from Ponchielli’s La Gioconda he surpassed even his already strong performance of the semi finals.’

Following his Second Prize in Den Bosch, Wakefield made a 1961 debut with the Welch Opera as Levko in Rimsky Korsakov’s May Night. Subsequently he had a major career as one of England’s prime tenors, a career which established itself foremost on the stages of Covent Garden, and the festivals of Glyndebourne (from 1964-1988), and Aldeburgh. In 1970 he participated in the English premiere of Hindemith’s 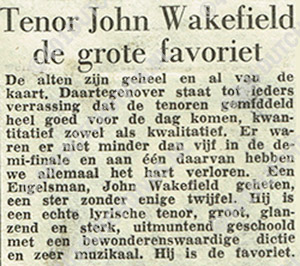 Cardillac, with the New Opera Company London. He was invited to the Teatro Colón Buenos Ayres, sang further in Brussels, and Lyon, Gärtnerplatz Theatre in Munich, the Santa Fé Opera, and at the Drottningholm Festival. Wakefield became a creator when he participated in the 1971 World premieres of Nicholas Maw’s The Rising of the Moon, at Glyndebourne, and Heitor Villa-Lobos opera Yerma, in Santa Fé. Of the more important revivals in his career we mention the once famous Leseuer opera Ossian ou les bardes, in which Wakefield sings the title role on some Unique Opera Records excerpts. Another major recreation was the title role in Méhul’s Uthal, in a 1972 BBC broadcast. In 1987 he was the protagonist in Cavalli’s L’Ormindo, at Glyndebourne, 1988 Tichon in Janacek’s Katja Kabanova. His lyric tenor voice shone brightest in Mozart, baroque, and modern music. His career has included roles like Macduff, Glyndebourne, 1964 and Rinuccio, the Royal Opera House, 1965. Other roles include: Feton, Tamino, Paris, Don Ottavio, Ferrando, Belmonte, Idamante, Rodolfo, Orfeo, Ormindo, Essex and Saul. Among others, he has recorded La traviata, Ormindo, The Mikado and Messiah.