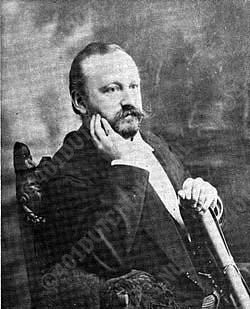 Willem Kes, born in 1856 at Dordrecht was nominated in 1888 as first conductor of the - in that year founded - Concertgebouw Orchestra. The artistic standard of the musical live in Amsterdam was not really high on that moment. Johannes Brahms, during a visit in 1879 at the capital city said about it ....."Ihr seid liebe Leute, aber schlechte musikanten"...... ( you are nice people, but poor musicians). But Willem Kes takes the job at hand on an energetic way. To raise the standard of the orchestra he founded the 'Orkestschool" upon which prominent musicians as Bernard Zweers, Wouter Hutschenruyter and L. Mossels gave lessons. He introduced a tight discipline, that applied not only for the the orchestra, but also upon the public he makes demands. During the concerts it was a (bad) habit to take a drink and also to have a chat. This wasn't tolerated anymore. When he raised his baton, he expected silence and only than he started with making music. He thought that this could be asked as honor to the art of music.

The Concertgebouw at Amsterdam 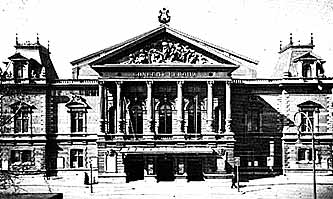 Willem Kes succeeded to get prominent musicians to Amsterdam, such as Pablo de Sarasate, Eugen d'Albert and Joseph Joachim. Except the German repertoire, also attention was given to the French repertoire. Composers as Chausson and d'Indy were present at performances of such programs. In 1895 Kes left the orchestra to take the 'improved position' of conductor of the "Scottish Orchestra". During the farewell concerto his successor - the young Willem Mengelberg - played the piano as soloist in the piano-concerto of Fransz Liszt in E flat-major.