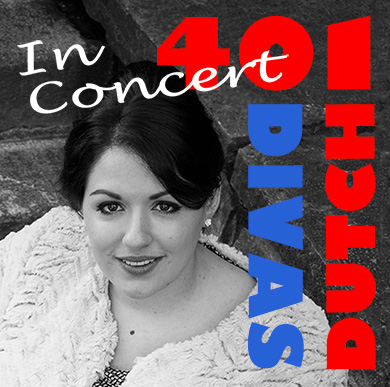 Once in every few years you step into the next operatic venue, open, curious and always hoping for the best, but never prepared to have the Mathilde Marchesi experience when she discovered Nellie Melba, and exclaimed ‘j’ai trouvé une étoile’. I had precisely that experience when I stepped into the 2013 rehearsals for Karel Miry's grand opéraBouchard d’Avesnes in Ghent, where the local ‘Lyrica’ Company was about to give the modern day creation of this unique opera. Hardly in, I set up my camera equipment when my ear was touched by a most moving, warm, perfumed and utterly attractive, not to say ‘seductive’ sound. From the first soprano notes of the duet ‘Dieu m’a donné le nom de mere’ I was intoxicated by the voice of Jolien De Gendt, and immediately decided that she would be the soprano for my plan to bring forgotten Dutch and Flemish operas to life by organizing concerts with highlights of these unique works. In those days I was  researching vocal music for my anthology in progress of Dutch and Flemish opera. De Gendt had a distinct timbre that  reminded me of the perfumed voice of Mado Robin, although De Gendt’s voice had a wholly different character, since it was more an all round bel canto voice. Her coloraturas in the I puritani Elvira or those of Lucia di Lammermoor and her peers in the operas from Bellini to Thomas were embedded in a dramatically convincing interpretation that was founded on a mellifluous middle register, based on a sound technical fundament, and paired with impeccable musical instinct. During the rehearsals for the first ever 401DutchOperas live concertof April 26, 2015 in Hoog-Keppel I was further impressed by her admirable identification with the project. Together with pianist Pieter Dhoore and tenor Denzil Delaere, more than 20 rehearsals were planned in order to revive these forgotten arias and duets of Dutch and Flemish opera to their full splendour! Jolien: ‘These are all modern day creations. There is no continued performance history for the operas of Ten Cate, Van Bree, Jan Rijken, Ignace Lilien, B. Polak Daniëls aka Baron Knigge, Gustaaf Francies de Pauw, Jan Brandts-Buys and Harry Mayer. In most cases not even the names of the composers are remembered. Pieter, Denzil and I myself soon became fascinated by this music, the project and the chance to recreate these works that we soon recognized as outstanding musical achievements. We truly believe that these forgotten 19th and early 20th Century Dutch and Flemish operas will surprise audiences. They are well worth investigating and I believe it is great that Seghers is pairing his research into the history of these works with a drive to revive them and bring them back into the repertoire. I am very proud that I am given the chance to contribute to this project.’’

At the age of six, Jolien De Gendt started her musical career at the Academy for Music and Word in Sint-Niklaas. She took violin lessons with Monique Moorthamer and voice lessons with Marie-Thérèse Maesen and Godfried Van De Vyvere. She soon decided to continue studying music and enrolled in the Kunsthumaniora for Music and Dance in Ghent. There she took singing classes with Philippe Wesemael, who prepared her for the Conservatory. Soon enough the lessons resulted in De Gendt being selected for solo parts in projects such as Noye’s Fludde by Benjamin Britten, Brrr…oadway, and the Chichester Psalms by Leonard Bernstein, with conductors such as Sabine Haenebalcke and Marleen Schampaert.

At the Ghent Conservatory, she studied with Gidon Saks, Marcos Pujol, Mireille Capelle, Zeger Vandersteene and Ronny Lauwers. She there sang the soprano solo in Carmina Burana by Carl Orff under Mark Michaël De Smet, and she sang music by Mozart with orchestras under Dirk Brossé, Wim Belaen and Michel Tilkin. Still during her Conservatory years, she was increasingly asked by ensembles, choirs and organizations to perform as a soloist. This resulted in various recitals.

With 'Scoppio Di Vesuvio', an opera company of students of the Ghent Conservatory under Gidon Saks, she performed The Governess in The Turn of the Screw by Benjamin Britten, Adèle in The Bat by Johan Strauss, and Belinda in Dido and Aeneas by Henry Purcelll.

She graduated from the Conservatory with the Alfred Aerens Prize for the most promising soprano. Continuing her studies, she became a laureate at the Operastudio Flanders. There Ronny Lauwers, Tuan Low-Siew, Vincent Van den Elshout, Hein Boterberg, Patrick Leterme, Yannis Pouspourikas, Helen Suyderhoud and Christiane Gleis coached her. Her projects there included Morgana in Händel’s Alcina. She also performed Joachim Brackx’ contemporary opera La mort au bal masqué. Under direction of Wiebke Goetjes she sang in an open-air performance in the Netherlands the role of Mozart’s Queen of the Night in Die Zauberflöte.

As soprano Jolien is engaged in the soprano section of the Flanders Radio Choir, where she also appears as a soloist. She is furthermore a popular soloist in oratorio and song recitals. She appeared, among others, in Orffs Carmina Burana, the Magnificat by Vivaldi and CPE Bach, various Mozart masses, and Händel’s The Messiah. With La Chapelle Sauvage under Karel De Wilde she performed in a string of passion concerts throughout the Netherlands and Belgium, in 2014, singing the ‘Stabat Mater’ of both Pergolosi and Scarlatti, and Pergolesi’s ‘Salve Regina’. In contrast to this baroque repertoire, De Gendt is also much at home in the most complex contemporary music, and Lieder. Richard Strauss and Mahler are among her favorites, and she performed their works among others with the Mahler Piano Duo.

At the 401DutchOperas live concert of April 26 2015 in Hoog-Keppel, Jolien shall recreate the great coloratura aria ‘Reviens, époux que j’aime’ from Karel Miry's Bouchard d’Avesnes in the Netherlands. She further sings the absolute world premieres of arias and duets from Jan Rijken's Norma (1889) and Harry Mayer's Faust (1952). As far as we could trace, the first opera was never performed after Rijken composed it, whereas the manuscript of Mayer's Faust was written à la Kafka, for his drawer; even his wife proved surprised when we recently informed her that her husband had composed an opera of which we planned to perform excerpts! Together with tenor Denzil Delaere and pianist Pieter Dhoore, De Gendt will create works at the 401DutchOperas concert of which the performance tradition has been lost for at least 70 to a full 180 years. Today, these recreations cast a unique spotlight on Dutch and Flemish operatic history between 1830 (Ten Cate's Seïd en Palmire) and 1928 (Ignace Lilien's Beatrijs ).

Bellida exempted, which was recreated already in 2004 by the Bérenger Foundation with director Frans Meewis, all other works on the program are modern day creations. Except solos and duets from the mentioned operas, De Gendt will sing at the concert the following program: ‘Wenn ich mit Menschen und mit Engelszungen redete’ from Carl Eckert's Guillaume d’Orange (1848), ‘La nuit s’avance’ from  B. Polak Daniëls aka Baron Knigge's opera Philippine Welser oder die Perle von Augsburg (1873), ‘Keusche Göttin’ and the final duet of Jan Rijken's Norma (1889), the ‘Air d’Orphéline’ from Gustaaf Francies de Pauw's Bellida (1897), and ‘Gott sei gedankt’ and the duet from Jan Brandts-Buys' Micarême (1919). As mentioned a ‘historical’ performance, which we will make available to the World of opera by means of audio and video downloads on the website, accompanied by a pdf booklet that holds splendid photographs and state of the art articles of composers and operas, along with full lyrics of the excerpts performed.