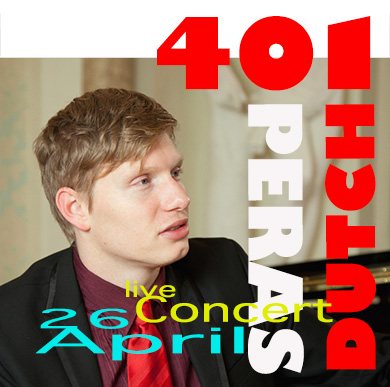 Pieter was born in 1983 in Ghent (Belgium). He got his first piano lessons from Alfonso Medinilla. Afterwards he continued his piano studies with Filip Martens, Katrijn Friant, Sabine Haenebalcke and finally at the Brussels Conservatory with Boyan Vodenitcharov, where he graduated with diplomes “Master in Music” and Pedagogy. Pieter took masterclasses in Belgium and abroad with renowned pianists, to mention Jan Michiels, Patricia Montero, Pilar Valero, J.J. Pérez Torrecillas, Ueli Wiget and Timur Sergeyenia.

As a soloist with symphonic orchestra, Pieter executed Prokofieff’s 3rd piano. In addition he already gave dozens of solo concerts, in which he often performs works by lesser-known composers. Recently he carried out an experiment around the composer K.S. Sorabji, especially notorious for his very complex and multi-layered piano music.
Pieter regards his role as a teacher as an important part of his career and does this since years with great pleasure. He attempts to transfer his passion to his pupils and wishes to be an inspiration for them.

Dhoore musical preferences  are tob e found within the realms of late)romanticism, impressionism and contemporary music, with a light preference for French and Spanish fin de siècle repertoire. He also enjoys performing the works of less well-known composers that, even if they are half forgotten today, greatly contributed to the musical development of their times. In addition, Dhoore is a passionate practicer of chamber music, the promotion of which which he considers to be a way life.

In 2007 Janpieter Biesemans dedicated the piano composition 'Eskapades' to Dhoore, who then proudly created it in De Muze van Meise.

Since 1996 Dhoore appears occasionally as a duo with flute player Jan van Hoecke, performing mostly contemporary repertoire. In 2001 he was awarded the 'Special Prize for Accompanyment' at the Axion Classics Contest. In 2006 he and Jan Van Hoecke won 3d Prize and Audience Award at the '6th National Muziek Contest Rotary Gent'. They appeared together in, among others, Spiegelzaal Brussels, De Muze van Meise, AMUZ Antwerpen, Handelsbeurs Gent, Koninklijk Conservatorium Brussel (Bozar), Conservatorium Gent and in the Paris Stock Exchange building Parijs. Composers such as Janpieter Biesemans, Ann Eysermans, Frederik Neyrinck, Blaise Ubaldini and Kevin Juillerat have dedicated compositions to the duo. Together with Champ d’Action they participated in a concert series and cd-recording of compositions by Flemish composer Luc Brewaeys. Dhooe also aprticipated in the recent cd-recording of solo- and chamber music by Janpieter Biesemans.

Since 2010 Dhoore and pianist Laurent Beeckmans perform together as the Mahler Piano Duo, bringing reductions for piano quatre mains of symphnic music, among their repertoire also Mahler's Symphonies. Dhoore also rewrites score for quatra mains and piano solo, among his accomplishments in the field are reductions of Stravinsky’s 'Le Sacre du Printemps' (see video) and Richard Strauss’ 'Eine Alpensinfonie'.

Pieter regards teaching as an essential part of his career: 'He attempt to transfer my passion to his pupils and wish to be an inspiration for them.' Currently, Pieter teaches piano at the Art Academies of Lede, Waregem and Bruges (Belgium).